Fusions with some of the newer characters, from the Leif & Thorn Gem AU. Two of Thorn with his team’s add-on knights, one of Rowan with his accidental new friend.

The ebook version is out, the print books are in production, and it’s high time I thanked everyone who helped make Volume 4 a reality.

Extra-special tips of the hat to:

At this point, I don’t know where I’ll run the campaign to print Volume 5. But through the course of Volumes 1-4, Kickstarter provided functional code and valuable features for the creators who used it, and I appreciate everyone whose time and effort made that possible.

The ✨ spotlights top backers and script-proofreaders; the 📚 highlights readers who got the whole backlist.

All Kinds Of Everything

Heroes Of Our Time

In Love With A Fairytale

So the Kickstarter site has made An Announcement, and the reaction from the creative community has been, uh…bad.

Listen, I fully expect their plans to get some revision. But it brings home a broader point that Blockchain Stuff In General is getting more interest outside the crypto-insider community.

Which means Comics Fans In General should try to have some informed opinions about them, you know?

As a casual rubbernecker of crypto-community scandals, I’ve been picking up that information for a while now. Mostly in random chunks, based on what’s relevant to the latest scam.

For those of you who are not thirsty benches that live for drama, I’m going to try to organize the useful parts into a single post, which you can read and digest in one sitting.

(There will be lots of links. Reading all of those might take longer.)

END_OF_DOCUMENT_TOKEN_TO_BE_REPLACED

Comment with a Leif & Thorn character and a number! (Or, if you like, a group of them.)

I collected all the webcomic fandoms in the tag set (plus all the characters you can request for each one), and added links to where you can read them online. Fandom tags are in the order/format AO3 puts them, which is why they’re not totally consistent, but all the actual titles seem to be right.

END_OF_DOCUMENT_TOKEN_TO_BE_REPLACED

To view this content, you must be a member of Erin Ptah's Patreon at $5 or more

The Leif & Thorn Volume 4 campaign is cruising along, so it’s poll time again: Which art should I use for the exclusive mini-print that goes in every book?

Don’t worry about the exact sizes — they’re all high-res enough for these prints, and I’ll adjust them to look good at the right dimensions. Just focus on picking your favorite(s).

END_OF_DOCUMENT_TOKEN_TO_BE_REPLACED

So, uh, wow. The extra prep and early promotion I’ve been doing for Leif & Thorn Volume 4 has paid off — 24 hours from launch and we’re 57% funded.

Also, got that Project We Love badge from Kickstarter right out of the gate. Nnnnice.

END_OF_DOCUMENT_TOKEN_TO_BE_REPLACED

Been a while since I’ve done a roundup of polls, huh? I try to keep the “end of the comments section” poll reasonably fresh, but people are still curious about the results of the older ones.

So here’s a bunch I just closed.

This post doesn’t include the “potential heartsword-quiz questions” polls — I’ll gather them up separately at some point.

For the most part, I’ll leave a poll up until it gets at least 100 votes, then replace it not too long after. Usually they last 2-4 weeks. Here’s one that soared to over 200 votes after being up for just 10 days:

Can we get an equal number of votes for every option in the results of this poll?
Total Votes: 211
Voting is closed
© Kama
END_OF_DOCUMENT_TOKEN_TO_BE_REPLACED

It’s the Fantasy Eurovision book, it’s the one where things keep going up in flames, I will be making so many Fire Saga jokes.

Here’s the new cover! With the earlier 3 lined up below it: 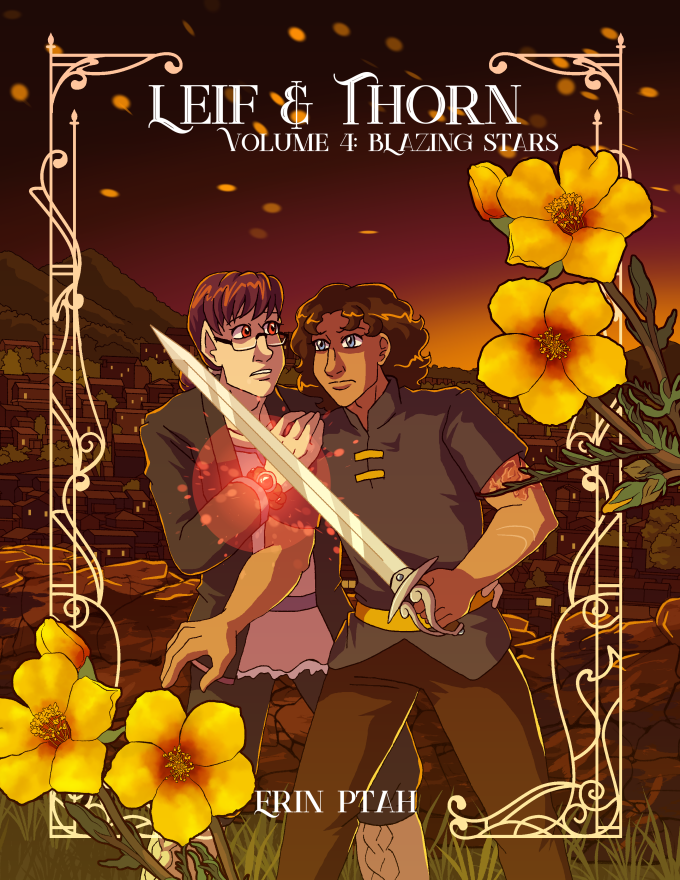 There’s a “making of” post on Patreon, where you can see the entire process from “sketchy pose tests” to “adding the last specks of flame.”

And the Kickstarter has a pre-launch page, where you can get notified when it goes live!

As usual, I’m doing Early Bird rewards — the first 15 backers who pledge over a certain amount get to prompt me for a Leif & Thorn sketch, which goes in the final version of the book. You don’t want to miss out.

A post to showcase the kinds of cool stuff you can get by supporting Leif & Thorn on Patreon.

Note: Almost all the posts are worksafe! There are a handful of 18+ posts, and there’s no way to just mark those posts (it’s a big feature gap on Patreon’s part), so you’ll get generic “this account is 18+” messages on everything. I’ll give you a real warning if I link to anything actually NSFW, don’t worry.

Patrons get exclusive wallpapers, of course — a new one every month, so I get to talk about those regularly. Most months I alternate between BICP and Leif & Thorn.

But Did You Know(TM), there are also…

Any Leif & Thorn strip that gets a lot of rearranging, I might make a post about the process. Like in the “Thorn tells Leif about his dragon injuries” Sunday arc:

There’s also a lot to say about thumbnailing some of the larger Sunday strips.

And about the art and the new coloring techniques used in the Kolpovision party splash panel:

Alt versions of strips, like these from 2020, that were completely finished before I decided to change something:

There’s a group of alts that are all just from Plus Ones. Some storylines are like that.

And a whole cut strip from Training Wreck:

Most recently, a bunch of deleted scenes and alternate strips came out of Borrowing Trouble:

Backstory! Progress sketches! Notes that might or might not make it to canon, in the final reckoning. Here’s the one about creating Atarangi:

A follow-up on Atarangi in the post revealing Thorn’s new knights, Kokum and Senna.

There’s also this whole post about the Woman in Black.

The one about Kudzu has early design sketches and a bonus strip (it’s not in the online archive, but it will be printed in Volume 4):

Other times, a range of bonuses get bundled together. The post with development notes about the Quarantine With The Vampire servants also has deleted scenes of 2020.

Sometimes the architecture needs love too, you know? Which is why there’s a whole post about [finally] creating a consistent floor plan for Tansy and Larch’s house:

And that kinda leads into the post about plotting the end of the Kolpovision party (with bonus notes about Hermosa, Dr. Glazier, and Pascentia).

There’s also a layout post for Hermosa’s medical room — although I didn’t tell readers exactly where it was yet. (I try to keep these posts light on Actual Spoilers.)

Some of the Patreon-exclusive art posts are Fanservice with a capital F. I’m not sharing any of those previews here; have a link to the whole NSFW tag, and (assuming you’re at least 18) enjoy.

Other times the bonus art is just cute.

Some posts aren’t exclusive forever; patrons just get the first look. Like this timelapse of the 2020 Christmas special.

Or this Tamaputian height chart, which patrons got to see back in May. It’ll be on the site…probably in September? But as of this writing, you can’t see it anywhere else:

If you’re really lucky, once in a while, you’ll get some bonus fiction. Like this flashfic about Tiernan’s daily routine. (Maybe I’ll put that in a book one day.)

Sometimes the update is just “check out the Kickstarter that just launched,” but there’s meatier stuff too. In the middle of the Volume 2 Kickstarter, I did a post with behind-the-scenes details of the process.

There’s another about the re-coloring I did in Volume 3.

And since we’re only a few months away (!!) from the launch of Leif & Thorn Volume 4, the next Cover Art Preview is coming up soon. Like, within the next couple of weeks, soon.

If that sounds like the kind of thing you don’t want to miss…new subscribers are always welcome.

You're reading a comic from Leif & Thorn: Off-Shoots

Unlock the images by supporting the artist:

Back to daylight Leif & Thorn 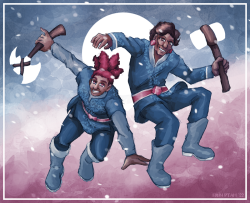 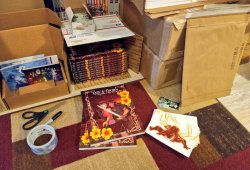